Steinhart Ocean One Vintage - A Beautiful Homage to the 6200, A Review (plus Video) 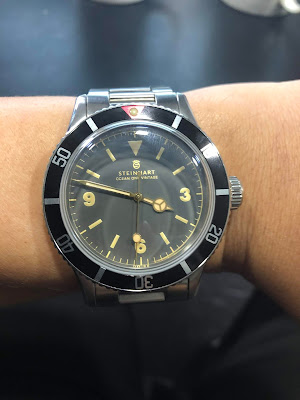 The O1V is a homage of a popular old model, the Rolex 6200. The Rolex 6200 was one of the very first Submariners introduced in 1954. Before that point in time, dive watches were very large and provided the diver with no other additional functions except the current time. The addition of a rotating bezel enables a diver to accurately monitor the dive times. Nevertheless, despite having a similar dial, markers, bezel and crown designs, the watch is definitely sized to current contemporary dimensions unlike the original Rolex 6200 which only has a width of 35 mm compared to 42 mm for the O1V. 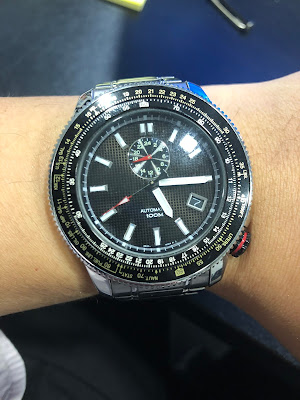 The Seiko Superior Flight Computer CYCLOPS series were first launched in 2011. Back than I was relatively NOOB in the world of horology. I did come across the series in the course of researching watches but I did not make an effort to get one. Back then, there were other 'grail watches' higher up the list of wants.

Nine years later, when browsing in the watch section in a major departmental store in Kuala Lumpur I stumbled on a gaggle of watches deemed as 'old stocks' with a 40% discount. In the middle of the pile was a SSA005K1. I couldn't pass up such an opportunity and within a few minutes, it was mine (definitely impulse buying <LOL>).

The Superior line has an illustrious history. Back in the days of the quartz watch revolution in the 1970s, Seiko has always equate precision with this line of watches. Unfortunately, after a rationalisation exercise of Seiko's sub-lines a few years ago, the brand has decided not to continue with the Superior line.

The nickname CYCLOPS was given to the watch by fans as the 24-hour sub-dial looks like a single eye on a face. Officially, it is called the Flight Computer due to its ability to calculate relatively complex mathematics using the circular slide rules incorporated in the bi-directional bezel. 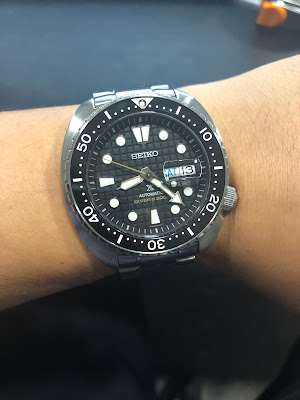 Currently in my collection there are three Seiko Turtles. The standard Turtle RP773K1 bought in January 2016, the Mini-Turtle SRPC37K1 bought in March 2018 and the re-crafted Captain Willard Turtle SLA033J1 bought in July 2019. All three are under the Seiko Prospex line.

The Seiko Turtle is a classic. When the first Turtle was introduced to the public back in 1970 with the launch of the now iconic Seiko 6105-811X dive watch (either 6105-8110 or 6105-8119; both are exactly the same, the last digit in the reference number indicates in which market the watch was originally sold), the watch buying public couldn't get enough of it.

The winning combination of technical capability and pricing put that Turtle and its progeny a 'must-have' in any self-respecting collection. Its simplicity, the wrist-hugging design and ruggedness give it an aura seldom seen in the watch world.

In early 2020, Seiko announced another series of Turtles for the market with a few major improvements or upgrades over the previous iterations. For the first time, sapphire crystal and ceramic inserts are now standard on the new models.

I was very surprised by the changes. The Prospex line is the professional tool watch line of Seiko and every material and design features are tailor-made to do a practical job and not for fashion-sake. Hence the continuous usage of Hardlex crystal (slightly less scratch resistance but better shatter proof and definitely cheaper than sapphire) and aluminum inserts for the bezel (not as scratch resistance but easier to manufacture and cheaper than ceramic). By replacing these traditional materials with sapphire and ceramic will undoubtedly affect the production cost and final pricing of the end product. 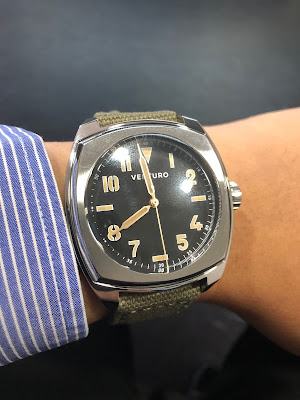 One genre of interest in my collection is military style watches (see here for the set of military watches in my collection). One of the more striking vintage military style watches (as well as rare) is the Rolex 3139. In 2020, Gruppo Gamma has decided to scratch-the-itch of military watch collectors by offering a close reinterpretation of the 3139 with some modern tweaks. The Gruppo Gamma Venturo Field Watch #2 is the design the brand came out with.

This is the second Gruppo Gamma watch in my collection. The first was a model from a collaboration of 50 pieces made for the Malaysia Watch Forum Group (or MWF) which was delivered in December 2013 (see here). I just realised that 2013 was also the year of establishment for Gruppo Gamma. I am very happy to note that the manufacturer MWF chose for that special project has grown into a proud brand.

I booked the watch when a pre-launch announcement was made for an introductory price of US299. The 200 meter water rating, the box sapphire crystal and the use of the SII NH35 automatic movement makes the introductory pricing look like a steal!

The first milestone is the 1964 Crown Chronograph (see below). 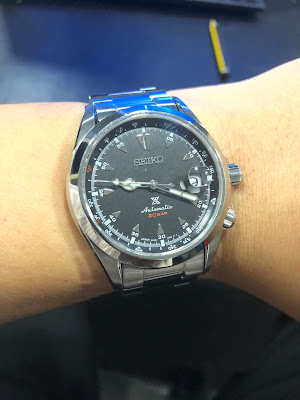 The Seiko Alpinist is a living icon. It was a series of watches designed in 1959 for Japanese mountain climbers and it started with the Laurel Alpinist. Today, the most famous of all the Alpinist and a cult classic, the SARB017 is the face of the series. In early 2018, devastating news came out from Seiko when it announced the end of the production for the SARB017. The fans were disappointed to say the least and Seiko was inundated with countless request for a stay of 'execution'. This caused a spike in the price of SARB017 still available with dealers as well as prices in the second hand market.

In late 2019, Seiko announced a new set of Alpinist with upgraded specifications slated for worldwide delivery starting January 2020. The fans were elated as Seiko decided to offer four different models. Three areas of improvement over the predecessor are in the movement, the crystal and the case-back. More about these things later. It is also important to note that all the models are made in Japan.

I was presently surprised that Seiko Japan allocated a number of units from the initial batch to Malaysia. My AD called to asked whether I would like to have one and I quickly agree to get one. Since I already got the SARB017 (click here to go to that review) with the deep British racing green dial, I chose the black dial version with bracelet, the SPB117J1. 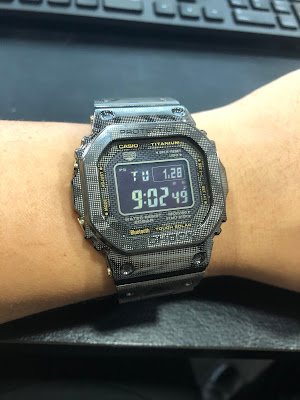 I have in my collection two Casio G-Shock squares. The all resin GWM5610BC-1JF and the all stainless steel GMWB5000GD-1ER. You can read a review I wrote on a head-to-head comparison between the two here. It was a long wait for me before I got the metal G-Shock due to the overwhelming demand.

While waiting, in February 2019, Casio announced the ultimate G-Shock Square, the 18 Karat Limited Edition Gold G-Shock 'Pure Gold' G-D5000-9JR. Only 35 pieces will be made and this has an MSRP of YEN7,700,000 or USD70,000. I was definitely interested but the pricing definitely it out of contention.

Around the same time news came out that Casio will also be coming out with a titanium model. What got everyone talking was the expected price point of the new model which has been estimated to be three (3) times more than the standard stainless steel unit. Immediately, a lot of not-so-nice comments were made on social media platforms complaining about this (no one commented much about the price on the Pure Gold version though). Since the pricing is not too exorbitant, I decided to hunt for this as well. 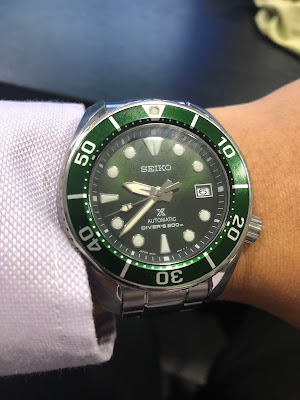 The third generation of the Seiko Sumo divers were recently released during Baselworld2019. The latest iteration has the two biggest changes in the design specification. First was the introduction of the new 6R35 movement to replace the workhorse 6R15 used in the previous two iterations. Second was the use of sapphire crystal instead of Hardlex crystal also used in the previous two iterations.

Unfortunately, this fact was not lost to fans and the demand for the watch went ballistic. Shops practically sold out even before they got the chance to display on their shelves (the pre-order market was just incredible). I tried to get one but I was not high enough on the order list to get one from even the first, second or third batches to be delivered. Not many watches have such a high level of demand upon launching. This could be an indication how this piece be acknowledged 30 years from now.

Sometimes it is good to have relationship with a few authorised dealers instead of just one or two. In this case, the many relationship I made over the years with a few vendors proved invaluable. One of them came through and got an allocation which was quickly set aside for me. Debra of Style Watch, Mid Valley Megamall, a big thank you!!! 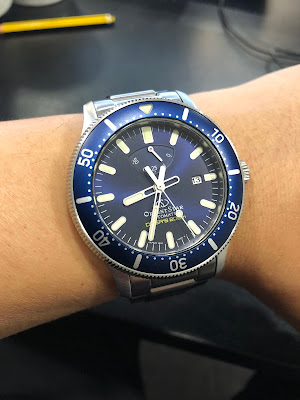 When Orient announced in August 2019 the launch of their new Sports Collection under the Orient Star brand, I was intrigued. For the last few years, the corporate restructuring involving Orient and Epson has taken a toll on the company's ability to offer new models. Compared to the other two famous Japanese brands such as Seiko and Citizen, during that period, Orient's offering was rather pathetic. However, 2019 appears to be a change. A couple of interesting series have been launched which are very interesting. For this review, I will be looking at the Air Diver series.

At first glance, the Air Diver series which consist of five models appear rather basic. They look like many of the run-of-the-mill dive watches available in the market. However, on closer inspection, these watches have been designed to almost perfect dimensions, able to perform many other tasks beyond being just a dive watch. Of the five models, I chose the sunburst blue dial version with reference number RK-AU0302L.

Although the design is rather contemporary, for Orient, it is a departure from its traditional design philosophy when it comes to dive watches. 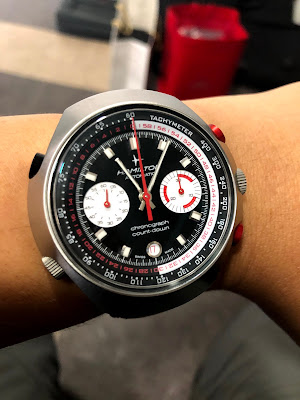 Recently, I was fortunate to get my hands on a 50th anniversary timepiece from Seiko that commemorates the brand’s first automatic chronograph movement launched in 1969. The Seiko Prospex Automatic Chronograph 50th Anniversary Limited Edition SRQ029J1 was made in honour of the Seiko Caliber 6139. It was a major milestone for Seiko but it also was part of a gigantic battle by big watch makers to come out with the first truly automatic chronograph. In fact, three competing designs were launched in 1969 by the three competing teams. The first team was Seiko, the second team was Zenith and the third team consists of Breitling, Heuer, Buren-Hamilton with the help of Dubois Depraz. I am happy to note that I also just gotten my hand on the 50th anniversary timepiece to commemorate the third team’s first automatic chronograph movement, the Caliber 11 Chrono-Matic. The Hamilton American Classic Chrono-Matic 50 Auto Chrono Limited Edition is the timepiece that Hamilton would like to remember that momentous event.

Like the Seiko commemorative timepiece, the Hamilton design is actually an interpretation of a 1972 model called the Chrono-Matic E GMT Countdown instead of a model designed in 1969 (Seiko chose a 1970 model instead of a 1969 design for their commemorative timepiece). Nonetheless, it was a great choice by Hamilton as the Chrono-Matic E is a classic and much sought after by collectors today.

From a career perspective, I have been a statistician since 1990. Did Actuarial work since 1992. A financial analyst since 1994 and financial engineer since 2008. My love for horology only became full-bloom since 2010. Coupled with my analytical and writings skills, I decided to operate this blog to share the beauty and wonders of watch collecting. This particular blog is catered specifically for watches designed and made in the East. Since September 2018, I have consolidate new reviews of Western made watches in this blog as well. For reviews of Western made watches before this, please refer to the other blog: http://westernwatch.blogspot.com/ I also have a YouTube account on the same subject matter; https://www.youtube.com/user/63672674/