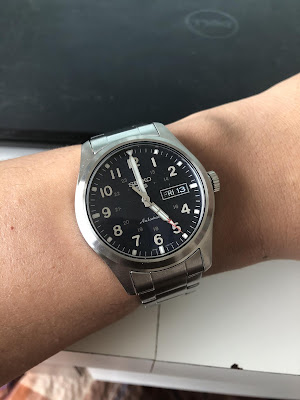 I have been collecting Seiko 5 series of military inspired watches for many years. These watches are basic, robust and practical. In fact, I would recommend these watches as a good starter watch for someone interested in the world of horology.
The genesis of the Seiko 5 military inspired watches is the iconic SNK805K2 (the link to the review is here). Nevertheless, the journey for me start with the next iteration of the genre, the SNZG09K1 which I reviewed in November 2013 (the link to the review is here). For me, that watch was a great value for money piece of machinery that can handle any situation. From then on, I start to collect the examples of the genre as new models were introduced.
Recently, the brand, under Seiko 5 Sports, launched the latest series of military style watches. There are a number of models to choose from. Although I would usually go for a green dial version, unfortunately, none came with a bracelet. Instead I chose a blue dial version, the SRPG29K1 to take home with me.
READ MORE »
Posted by 63672674 at 5:40 PM 7 comments:

Seiko Prospex The 1959 Alpinist Re-creation SJE085J1 Limited Edition - Something Fundamental is Missing, A Review (plus Video) 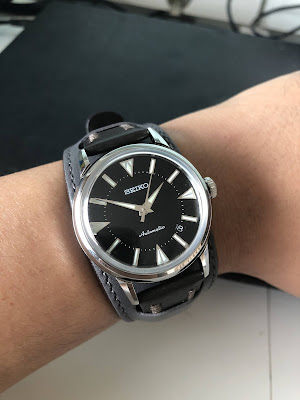 The first Seiko Alpinist I bought was the SARB017 back in 2013 when I had the opportunity to visit Tokyo, Japan. The link to the review can be found here. Although the Alpinist line is synonymous with the forest green dial and internal map bezel, the genesis of the line - The 1959 Seiko Laurel Alpinist - is dissimilar.

In early 2018, Seiko announced the end of the production for the SARB017. As a replacement, in late 2019, Seiko announced a new set of Alpinist with upgraded specifications slated for worldwide delivery starting January 2020. I then took delivery of the SPB117J1 (click here to read the review). By then, Seiko has been issuing a number of limited edition re-creations of their iconic models and I suspect the original Alpinist will be up for a relaunch in the very near future. I just need to wait patiently.
After 62 years, Seiko finally decided to re-introduced the original via The 1959 Alpinist Re-creation with reference number SJE085J1 but under the Prospex line. Seiko decided against resurrecting the original Laurel line. A pity actually especially after Seiko re-introduced the King Seiko line recently (see the review here).
I was made to understand that my dealer only ordered one. Earlier, I have already instructed my dealer to immediately put in an order when the watch is available for sale. My dealer executed the order perfectly and he was able to immediately confirmed my booking. I waiting for four months before it finally came.
READ MORE »
Posted by 63672674 at 10:22 AM 5 comments: 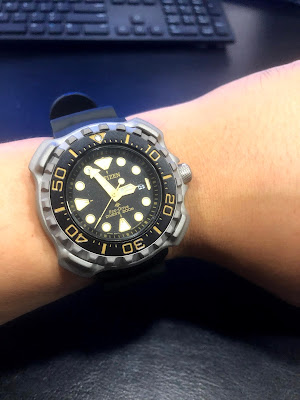 In March 2021, Citizen announced a launch of three new set Eco-Drive powered marine models under the Promaster line. These 200 meter dive watches have design features similar to the legendary Citizen 1,300 meter Professional Diver watch of 1982; a watch with the deepest depth rating at that time.
Honestly, I was intrigued by the shape of the casing. The lug free design and the four very distinctive bezel guards gives the watch a visual perception of toughness as well as uniqueness. Despite the bulk, the weight is deceivingly light due to the use to titanium which I am fond of.
There are three models to choose from.  I decided on the BN0220-16E (BN0220 for short) as this model closely resembles the 1982 icon. Although this model is available from a local vendor, I decided to go through my favourite Japanese vendor, SeiyaJapan.
After taking into consideration the importation fees etc., the watch still turned out to be cheaper than getting it from a local vendor.
I did not have to wait long. The courier was very efficient, settling all the import taxes quickly and delivering the watch to me within 72 hours after making the order.
READ MORE »
Posted by 63672674 at 12:51 PM No comments: 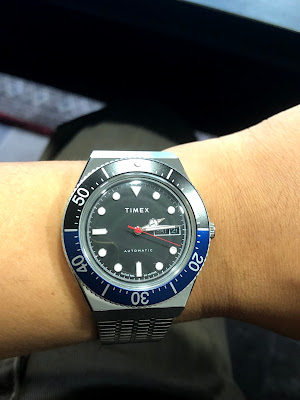 Timex, the Waterbury, Connecticut-based watchmaker launched Timex Q re-editions in May 2019. That series of watches caught the attention of the watch community due to the evergreen design and ties to the classic 1970s Q-watches. I was keen to get one but unfortunately, the distribution network of Timex is rather poor in Malaysia. Those watches came with quartz movement and I have a feeling, very soon, an automatic movement will be added to the line.

In February 2020, Timex did just that. A series of mechanical watches with the Miyota 8205 movement was added thus the "M79" range was born. The "M" stands for mechanical while the "79" was the year the original Q was released.
I tried getting one in Malaysia but unfortunately, with the Covid19 Pandemic starting to bite, it was likely that the only way I was to get my hands on one is via international online merchants. I waited for over a year and finally made my order via Amazon.
I had to make a choice between 'Batman' (black and blue bezel combination) or the 'Pepsi' (black and red bezel combination). Although I like both, I finally decided on the 'Batman', reference number TW2U29500ZV.
READ MORE »
Posted by 63672674 at 10:30 AM 5 comments:

Grand Seiko Sport Collection Spring Drive Air Diver SBGA229G - A Handsome Watch and Due to its Flexibility, Proves it Value Beyond Doubt, A Review (plus Video) 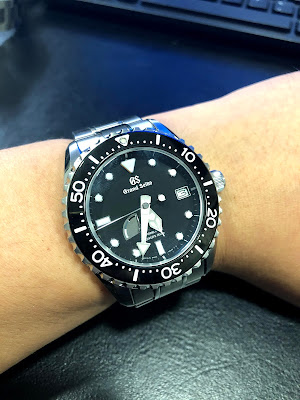 Out of the blue, my dealer sent me a short message that he got allocated one unit of the Grand Seiko Sports Collection Spring Drive Diver SBGA229G (let’s just called it SBGA229 for short). I have been looking at something similar for some time now. The original model I was interested in was the SBGA029. That model was first launched in the market in 2008.
The SBGA229 is essentially similar to the SBGA029. In 2017, Seiko decided to make Grand Seiko an independent brand. Hence, before 2017, the model was called the SBGA029 where the generic ‘Seiko’ tag was still prominent, sharing space with the ‘Grand Seiko’ tag on the dial. From 2017 onwards, only the tag ‘Grand Seiko’ is provided thus the change in reference to the SBGA229.
I quickly took delivery as I heard from the grapevine that Grand Seiko has stopped production for this particular model (can anyone confirm?).
The Series
For the longest time since the Grand Seiko brand was reintroduced back in 1998, the only dive watches under this brand were the SBGA029 and the SBGA031. The former is made out of stainless steel while the latter is made out of titanium. Only after the rebranding exercise in 2017, Grand Seiko decided to introduce a few other dive watches to expand the range. Even so, the original pair continued to be produced under new designations (replacing the digit ‘0’ with ‘2’). Major differences between the two models are the material (stainless steel versus titanium), weight (201 gm versus 137 gm) and price (RM24,300 versus RM27,900).
READ MORE »
Posted by 63672674 at 7:33 PM 4 comments: 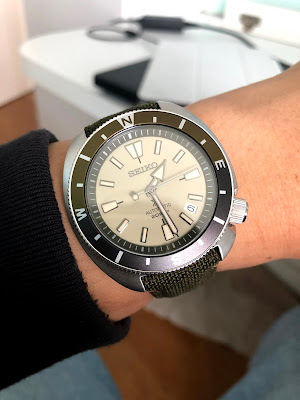 For 2021, Seiko came out with a new sub-range of sport watches using the classic 'turtle' casing for land use. Although having the same overall water resistance to the dedicated diving models, this new set of watches have bi-directional bezel with compass bearing instead. To differentiate, this new sub-range has been give the nickname 'Land Tortoise'. There are current four models available: SRPG13K1, SRPG15K1, SRPG17K1 and SRPG18K1.
As a collector, it would be good to have at least one of the models. I had the opportunity to see all four at once and the most stunning to me is the SRPG13K1. It didn't take me long to decide that the SRPG13K1 will follow me home.
The Series
The new watches look like the Sea Turtle (generally they are known as 'Turtle' but since the new series were given the nickname 'Land Tortoise', I suppose 'Sea Turtle' would be more appropriate), only with different hands, dial and bezel designs. It also has been downsized from 45 mm to 42.3 mm which would be more wearable to a bigger group of fans. When my dealer informed me that he has the set in his shop and showed me some pictures, I was intrigued by one of the photos that showed the case-back. It was reminiscent of the Seiko Prospex Fieldmaster SBDC011 and the Seiko Prospex Automatic Field Watch Green SRPD33K1 which have similar case-back graphics.
READ MORE »
Posted by The Blogger (63672674) at 11:05 AM 15 comments:

I recently bought the limited edition King Seiko KSK SJE083J1 and I was gifted a signed travelling pouch. Nothing spectacular about the material used (faux leather). Nevertheless, this item is not available for sale and hence having it is kind of unique. If you want to know more about the SJE083J1, please click here: https://easternwatch.blogspot.com/2021/04/king-seiko-ksk-sje083j1-limited-edition.html 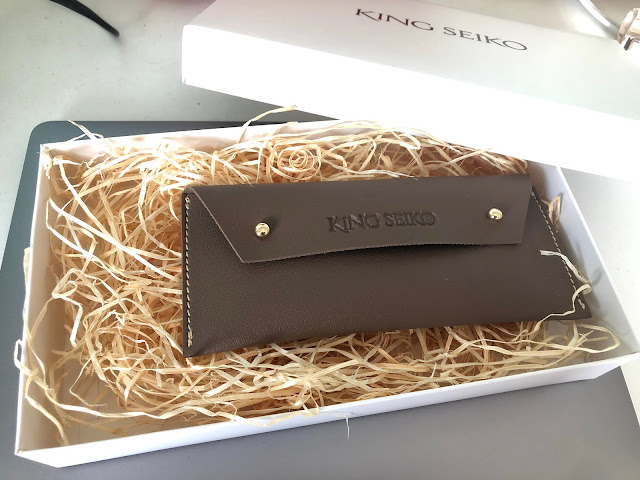 A Book on Wristwatch Complications

This is an online book about watch complications. Very informative. Please note that the copyright remains with the author. The purpose of uploading this is purely for information purposes.

Email ThisBlogThis!Share to TwitterShare to FacebookShare to Pinterest
Labels: Book

King Seiko KSK SJE083J1 Limited Edition (or SDKA001) - First Class and Carries itself Well Beyond its Price Point, A Review (plus Video) 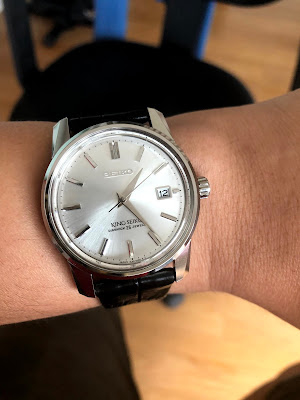 A century is a long time. In 2021, Seiko will be celebrating its 140th years in operations since it was first established in 1881. To mark this momentous occasion, Seiko has in store a number of new and exiting models. One of the most anticipated release is a revival of one of its famous sub-brand and model, the 1965 King Seiko KSK.
The last time Seiko recreated a model under the old King Seiko sub-brand was in the year 2000 with the launched of the SCVN001 as part of the Seiko Historical Collection of that year. Twenty years later, on 8 December 2020, Seiko announced the second official recreation of the King Seiko line.
This second recreation is designated the SJE083J1 (in Japan the reference is SDKA001). Called the King Seiko KSK, it is based on the 1965 model of the same name. KSK is an abbreviation of the name “King Seiko Kisei-Tsuki”. This special limited edition watch revives the 1965 Reference 44-9990, or the “44KS”. I was fortunate to get my hands on one via my good friend at AWG in Mid Valley.
READ MORE »
Posted by 63672674 at 12:00 AM 3 comments: 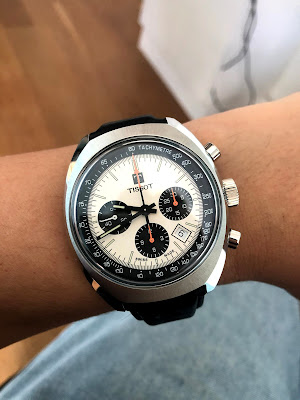 The last time I bought a Tissot for the collection was in 2011 when I visited Switzerland for a family holiday. All this while, I have been eyeing a number of its classically designed models under the Visodate range. Unfortunately, these models were never up there in terms of priority. However, in 2019, Tissot launched the Heritage 1973 limited edition timepiece to commemorate its involvement in motorsports back in the 1970s.
In 1976 Tissot entered the world of F1 when the brand became the official backer of young driver called Loris Kessel. Although Kessel isn't as well known as some of his contemporaries, he was a true motorhead. He not only raced, but also created Kessel Classics, a Swiss shop that specializes in campaigning classic race cars in historic races around the world as well as running a Swiss motor racing team under the same brand name. The operation is located in the canton of Tessin, Switzerland. Tissot is currently in partnership with the racing team, Kessel Classics. The Tissot Heritage 1973 was introduced to celebrate the Tissot’s relationship to motorsport and the Kessel branding.
READ MORE »
Posted by 63672674 at 6:07 AM 6 comments:

From a career perspective, I have been a statistician since 1990. Did Actuarial work since 1992. A financial analyst since 1994 and financial engineer since 2008. My love for horology only became full-bloom since 2010. Coupled with my analytical and writings skills, I decided to operate this blog to share the beauty and wonders of watch collecting. This particular blog is catered specifically for watches designed and made in the East. Since September 2018, I have consolidate new reviews of Western made watches in this blog as well. For reviews of Western made watches before this, please refer to the other blog: http://westernwatch.blogspot.com/ I also have a YouTube account on the same subject matter; https://www.youtube.com/user/63672674/